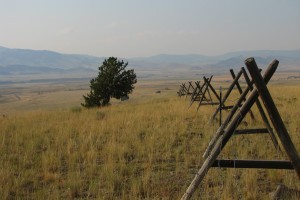 When I imagine an Anarchist society, one of the main things I notice is that everything is freely shared by everyone and there is no private property.

Some people get very concerned at the idea of no private property. People like their stuff and they wouldn’t want to lose it. I think some people imagine that without private property they’d be living in the forest without any possessions, scrounging for food with only the clothes on their back.

But there is an important difference between ownership and use. People can use things without owning them. And what we really want is to use things.

What if you could have full use of all of your current clothes, but when you weren’t using them, someone else was wearing them? Would the experience of wearing a shirt be any different if someone else wore it?

The problem is that society has taught us to see everything in terms of scarcity. We think that there is not enough to go around. And so, if we want to use something, we have to own it and not let anyone else use it, so that we can use it when we want.

But it doesn’t have to be this way. If we could set aside the scarcity model and embrace the abundance model, we would realize that there is enough to go around. We don’t need to stop others from using things in order to enjoy them ourselves.

I’ve been experimenting with giving up property. It started by sharing “my” bike with a roommate when his bike was stolen. I only needed it occasionally and it usually just worked out. Sometimes we’d both want to use it and we’d work out a schedule. It worked very well and was very simple!

Since then, I’ve announced to the people I live with (there are 11 of them) that they can use anything that is “mine”, including the room I live in, whenever they want. So far, people haven’t taken advantage of the offer very much because we are so well trained not to use other people’s things. But sometimes people use the room when they want to go somewhere else to study or something.

I also have been trying to not use “possessive language,” which basically means avoiding the words “my” and “have”. It’s not as hard as it sounds and it helps shift how I think about the things I use.

Honestly, the hardest thing to think about not being “mine” was the laptop. I use it so much and I have a very strong connection to it. So the thought of losing it was a big barrier to starting the experiment.

But then I realized that I wasn’t losing it. If I don’t own it, it doesn’t mean that someone else does. I could still use it, and so could anyone else. And if I needed to use it, it’d be a simple conversation about when they’d be done. That wouldn’t be so bad.

I’ve found it to be quite freeing. It’s a relief to not be tied down to things. I don’t have to worry about other people using them. They are just things that I use.

“The things you own end up owning you” – Fight Club

Now, I’d like to invite you to give up your possessions too! You wouldn’t have to give up all of them. Maybe start out with a few things. Offer to let other people use them whenever they want (bigger things like bikes or cars are good for this). You can pay attention to how you speak and try not to use possessive language!

Give it a shot and I’d love to hear how it goes and if you have any questions! You can write in the comments or privately.